After a months-long search, the William G. Lowrie Department of Chemical and Biomolecular Engineering is thrilled to announce that it has hired six new faculty. 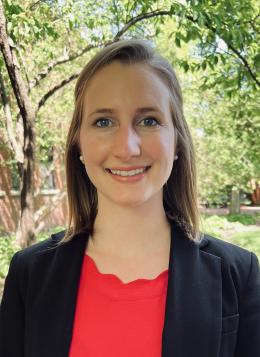 Rebecca Harmon will join the department as an assistant professor of practice on October 1, 2022. She is currently a joint doctoral candidate in the Department of Chemical and Biological Engineering at Northwestern University and the Van ‘t Hoff Institute for Molecular Sciences at the University of Amsterdam. Harmon's PhD advisor at Northwestern is one of our department's most distinguished alumni academicians: National Academy of Engineering member Linda Broadbelt ('89 BS), currently Rebecca Roland Professor and Associate Dean for Research at Northwestern.

She served as the past president of Northwestern’s Women in Science and Engineering Research graduate student organization and now serves as a co-chair of communication for the Education Division of AIChE. Her research and teaching interests are in complex reaction network analysis and kinetic modeling, numerical methods, and engineering education.

In a seminar Harmon gave on campus in January, she discussed her PhD work on the application of reaction kinetics to cultural heritage science via computer simulation. From this, she developed chemistry lesson plans for K-12 classrooms and an undergraduate Chemical Product Design course module at Northwestern University. She outlines her teaching philosophy with the acronym RECAPS (Resources, Ethics, Creativity, Access, People-oriented, Safety). 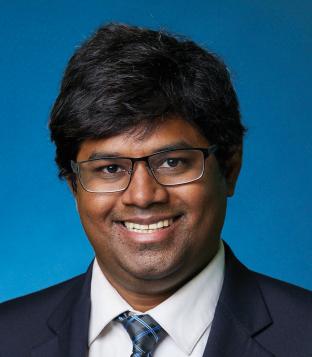 Mandar V. Kathe will assume the position of assistant professor of practice in the fall of 2022. Professor Kathe received both his master’s degree and his 2016 PhD in chemical engineering from The Ohio State University. He also earned a master’s degree in data science from the University of British Columbia’s Computer Science Department in 2021.

Kathe’s research at TU has been focused on developing applications of Artificial Intelligence (AI) techniques in Chemical Engineering Practice. Kathe is also leading a Tuskegee College of Engineering team that is in the process of securing private and government funding to create equitable pathways to STEM graduate education for minority students.

During a November 2021 seminar Kathe gave at Ohio State, he illustrated the transformative potential of data analytics and AI methods using his research projects at TU. He also talked about the development of Convolutional Networks to identify surface cleanliness as well as work on developing auto-encoders that identify new molecules using a latent space that is obtained by joint training with property prediction. 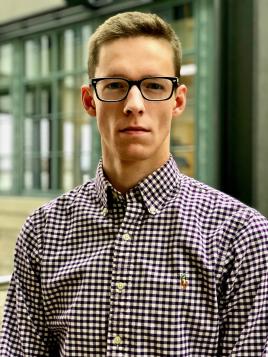 Blaise Kimmel will join the department on January 1, 2024 as an assistant professor. He earned degrees in chemical engineering from The Ohio State University (’17 BS) and Northwestern University (’21 MS/PhD, Milan Mrksich Lab) and holds a Certificate in Management for Scientists and Engineers from Northwestern’s Kellogg School of Management. While a doctoral student, Kimmel was a Ryan Fellow in Nanotechnology, a Northwestern Graduate Teaching Fellow, and a recipient of the NSF Graduate Research Fellowship.

In April 2022, Dr. Kimmel gave a seminar at The Ohio State University in which he described how advances in synthetic biology have led to on-demand antibody therapies that have the potential to target tumors discriminately, leaving healthy cells unaffected but posing a grand challenge in the inability to program the structure of these therapeutics to improve cancer treatment outcomes. Thus, his research focuses on developing next-generation therapeutic protein carriers that offer programmable control over the delivery and activation of immunomodulatory agents.

Kimmel will be affiliated with The Ohio State University Comprehensive Cancer Center when he joins Ohio State. 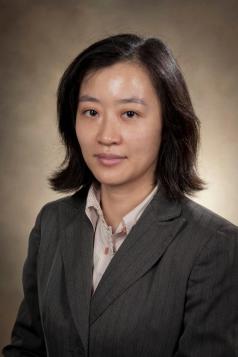 X. Margaret Liu joined the department as a professor with tenure on June 1, 2022. She obtained a PhD in chemical engineering from The Ohio State University in 2005.

Previously, she was an associate professor in the Department of Biomedical Engineering at The University of Alabama at Birmingham (UAB), where she holds the Reichhold-Shumaker Professorship. Her research focuses on developing, producing and evaluating new targeted anti-cancer therapies such as monoclonal antibodies, antibody-drug conjugates and gene therapies, and other innovative technologies. These projects have been actively supported by National Institutes for Health and Department of Defense grants and have led to three patents and a licensing agreement, with others pending.

Professor Liu received the University of Alabama’s Outstanding Faculty Award in 2016, the RGC Level 2 Award in 2015, the System Research Collaborative Award in 2014, and the RBC Level 1 Award in 2012.

Dr. Liu is the author or co-author of 61 journal papers and book chapters and has given 85 conference presentations and lectures, ten of which were invited.

Prior to joining academia, she worked in the biopharmaceutical and biotechnology industry for six years. During this time, she won four company R&D Excellence Awards, the Life Technologies Bronze Award, a New Idea Award, and a Customer Excellence Award.

Liu will be affiliated with The Ohio State University Comprehensive Cancer Center when she joins Ohio State. 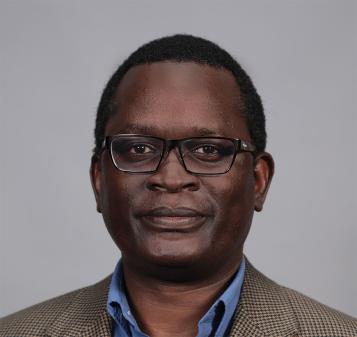 Joshua Sangoro begins his CBE appointment as a tenured professor and associate chair on August 15, 2022. He earned a PhD in experimental physics in 2010 from the University of Leipzig (Germany) with Professor Friedrich Kremer. His dissertation research focused on studies of ionic liquids by broadband dielectric spectroscopy.

Sangoro was previously an associate professor and associate department head in the Department of Chemical and Biomolecular Engineering at the University of Tennessee-Knoxville (UT). His research, which has been supported by the National Science Foundation, Department of Energy, and Army Research Office (ARO), focuses on energy and sustainability, ionic liquids, deep eutectic solvents, dynamics of liquids and polymers at interfaces, and broadband dielectric spectroscopy. Professor Sangoro joined the Department of Chemical and Biomolecular Engineering at UT in the fall of 2013 as an assistant professor and was promoted to associate professor in 2019.

Before joining UT, he worked as a research scientist at the University of Leipzig until early 2012 when he joined the Chemical Sciences Division of the Oak Ridge National Laboratory as a postdoctoral research associate. In 2012, he was awarded the Feodor-Lynen Research Fellowship by the Alexander von Humboldt Foundation.

Dr. Sangoro has authored or co-authored over 70 peer-reviewed articles and book chapters and has contributed to over 70 (28 invited) technical presentations at national and international meetings.

Sangoro is a selectee of the ARO Young Investigator Program and the NSF CAREER award, as well as the University of Tennessee-Knoxville’s Tickle College of Engineering Professional Promise in Research Award (2019), the Tom and Ruth Clark Chemical Engineering Excellence Award (2019, the highest honor accorded to chemical and biomolecular engineering faculty for excellence in teaching and research), and the Chancellor’s Award for Professional Promise in Research and Creative Achievement (2021).

In the February 2022 seminar he gave at Ohio State, Sangoro talked about polymerized ionic liquids, a novel class of functional polymers that combine the unique physicochemical properties of molecular ionic liquids (e.g. wide electrochemical windows, negligible vapor pressures, and ionic conduction) with the outstanding mechanical characteristics of polymers. He shared new insights into the dominant mechanisms of charge transport and dynamics obtained from combined experimental and theoretical efforts and discussed some immediate technological benefits of these findings. 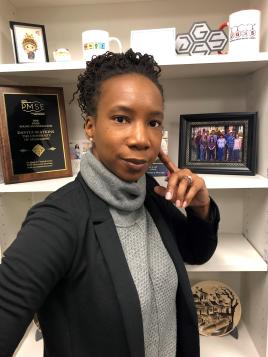 In 2012, she obtained a PhD in chemistry from the University of Memphis under the tutelage of Dr. Tomoko Fujiwara. As a doctoral candidate, she developed multi-step synthetic methods for a series of stimuli-responsive molecules and polymeric materials, demonstrating potential applications in phase transfer catalysis, catalytic control, and drug delivery. Watkins completed her postdoctoral research with Dr. Ronald K. Castellano at the University of Florida, where she developed novel self-assembling organic materials for photovoltaic applications.

Watkins is currently an associate professor at the University of Mississippi, where she began her independent career in 2014. Her research focuses on establishing design guidelines towards novel functional materials with tunable properties through molecular self-assembly. The well-defined, programmable nanostructured materials produced in her laboratory are designed to be used in various applications, ranging from therapeutics to electronic devices. Prior to joining academia, she worked as a lead chemical analyst for a bioanalytical company.

Watkins' honors include the Oak Ridge Associated Universities (ORAU) Ralph E. Powe Award (2014), a National Science Foundation CAREER Award (2017), designation as a Young Investigator by the Polymeric Materials: Science and Engineering (PMSE) Division of the American Chemical Society (2018) and selection as an Emerging Investigator by the Royal Society of Chemistry's Journal of Materials Chemistry C., and the Lloyd N. Ferguson Young Scientist Award. In 2021, Watkins was named a Trailblazer by Chemical & Engineering News (C&EN) and an International Union of Pure and Applied Chemistry (IUPAC) Young Observer. Most recently, she was named a 2022 Rising Star by the ACS Women Chemists Committee (WCC).

In Watkins’ September 2021 campus seminar titled “Supramolecular Polymer Hybrids: Linear-Dendritic Block Copolymers (LDBCs) as Novel Strategies for Theranostic Nanomedicine,” she described how the ability to control molecules and understand their organization into discrete nanoscale arrays that exhibit unique properties affords the opportunity for transformative advances in chemistry and material science. Results of this study demonstrate the significant contribution of “bottom-up” approaches towards efficient materials for bio-imaging and theranostic medicine.