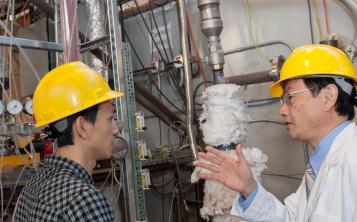 Some faculty have a talent for research, while others excel at teaching and mentoring. The two do not always go together hand in hand.

Not so in the case of C. John Easton Professor of Engineering and Distinguished University Professor L.-S. Fan. He not only possesses both skills--he deploys them with the greatest levels of expertise.

Professor Fan's research and the innovative technology he has developed are renowned worldwide. His chemical looping technology, which has the capability of producing green hydrogen, fuels and chemicals in addition to assisting power plants in reducing or eliminating carbon emissions, could have significant global impact on the energy sector. His technology has been licensed to industry for commercial deployment.

Professor Fan's prowess in research was evident early in his career. In 1996, he earned one of the highest awards for research excellence offered by the American Institute of Chemical Engineers (AIChE) - the Alpha Chi Sigma Award for Chemical Engineering Research. His many other research honors from AIChE include being named as one of the ”One Hundred Engineers in the Modern Era” in its Centennial Celebration in 2008.

Successful nominees for the Lewis Award demonstrate success in a variety of capacities: as a teacher with an established command of the subject matter and an ability to inspire students and colleagues to high achievement; through contributions of lasting educational influence such as superior textbooks, lectures, and laboratory techniques or models; and by having an impact on the education of chemical engineering students as a result of creative ability via scholarly contributions to literature, inventions, contributions to developments in industry, or through consulting or government service.

The Lewis Award will be presented to Professor Fan at the Institute's honors ceremony during the 2022 AIChE Annual Meeting, which is scheduled to held in person in Phoenix, Arizona, November 13-18.

The Warren K. Lewis Award is sponsored by ExxonMobil Research and Engineering Company.

L.-S. Fan is Distinguished University Professor and C. John Easton Professor in Engineering in the William G. Lowrie Department of Chemical and Biomolecular Engineering at The Ohio State University. He has been on the chemical engineering faculty at Ohio State since 1978 and served as department chair from 1994 – 2003. Professor Fan received his B.S. (1970) from National Taiwan University, and his M.S. (1973) and Ph.D. (1975) from West Virginia University, all in chemical engineering. In addition, he earned an M.S. (1978) in statistics from Kansas State University.

Professor Fan is the author or co-author of 465 journal articles, 70 patents, and six books including the most recent textbook (2021) “Dynamics of Multiphase Flows” by Cambridge University Press. He is the Editor-in-Chief of the journal Powder Technology, and has also served as a consulting editor of ten other journals and book series, including the AIChE Journal and the International Journal of Multiphase Flow. He has given 36 distinguished or named lectures, including the 2015 AIChE Annual Conference's Institute Lecture.

An entrepreneur’s vision to help others see