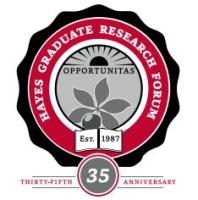 Dr. Edward F. Hayes (1941–1998) was an internationally-distinguished scientist whose research interest was in molecular electronic structure theory, molecular scattering theory, and parallel computing methods. In 1991 he joined The Ohio State University as Vice President for Research and Professor of Chemistry. Dr. Hayes exemplified the highest ideals for excellence in teaching, scholarship, and service. He continued to teach chemistry and maintained an active, productive research program during his tenure as Vice President for Research.

The Hayes Graduate Research Forum is one of several programs organized by the Council of Graduate Students (CGS), the student government for graduate students at The Ohio State University. 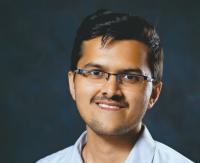 "It was a good experience presenting my research to people outside of Chemical Engineering," Faiz said. "I had to adjust with my audience’s level of understanding and convey results in much simpler terms, which was good practice."

Faiz is a student in the Winter Laboratory.

Impact of research: Not only have the kinetics only very recently been explored for Pd-SOMS for the first time, Benjamin and his group also adapted a synthesis methodology to size control the size of Pd sites formed within our SOMS material via synthesis.

"Broadly, this is one of the first of hopefully many studies delving deeper into the kinetics of this complex material, but will also mark the last of my projects that I will have completed with Dr. Umit Ozkan in my 4.5 years of working with her," Benjamin said.

Research Statement: Porous catalysts offer enhanced product selectivity and tunability to the desired applications.  However, these materials also suffer from mass transfer limitations in which the reactant molecules have difficulty diffusing to the catalyst’s active sites.

Impact of research: Justin's research focused on minimizing these limitations by changing the dimensions of zeolite catalyst crystals and studying the effects that these modifications had on the catalytic properties of these materials.

The project, conducted under the advisement of Dr. Nicholas Brunelli, helped him gain a better understanding of how mass transfer limitations affect zeolite-based catalysis and how to address and minimize these limitations in the future.  "This allows us to not only improve our catalyst’s performance but also gives us the ability to separate diffusion limitations from other phenomena that we want to study," Justin said.

In commenting about his award, Justin said that this research project helped him learn how to approach tough research questions as a scientist.  "For example, I learned how to frame my results in the larger context and applications of our problem, and I learned how to transform research data into a form that is readily accessible and easier to present and understand," he said. 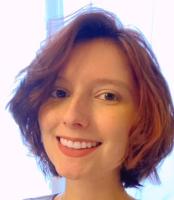 Research Statement: Emily's work focused on the development of nanoparticles of hemoglobin to work as a red blood cell substitute. This work optimized the previously development method of co-precipitation while adding a novel size reducing step of sonication post-synthesis. This allowed for particle formation within an ideal size range of 150 - 300 nm at various reaction scales.

Impact of research: Current work is being conducted on biocompatibility, but nanoparticles with the starting potential to work as a red blood cell substitute were developed. This has incredible implications in the realms of transfusion medicine, as currently red cells are taken from a limited donor population and only have a shelf life of 42 days.

"From this experience, I've developed a passion for innovation and discovery, gained an outlet for my overdeveloped sense of curiosity, and began to learn the importance of failing forward," she said. "As Marie Curie said, 'Nothing in life is to be feared, it is only to be understood.'  I know I will be taking these lessons with me as I start my career at Abbott upon graduation. However, I could not have succeeded without the excellent guidance, trust, and mentorship of doctoral candidate Richard Hickey and Dr. Andre Palmer."

An ‘artificial’ approach to saving lives

All gone to Argonne