Posted: April 16, 2019
A day at the races is always exciting -- especially when your team wins first place!

Each year, the American Institute of Chemical Engineers (AIChE) ChemE Car Competition®  engages college students in designing and constructing a car powered by a chemical energy source that will safely carry a specified load over a given distance. Teams of chemical engineering students across the country create and then race the cars against other schools in multiple regional competitions. The winners go on to compete nationally at the AIChE Annual Student Conference.

The Battery Team also won the Best Design competition that was voted on by the other teams, and took Second Place in the Poster Competition.

"Both of our teams did fantastic -- finishing first and second was always the goal and not only did we do that, but we got closer to the line then we ever have before in my experience with ChemE Car!" said ChemE Car President Joe Gruber. 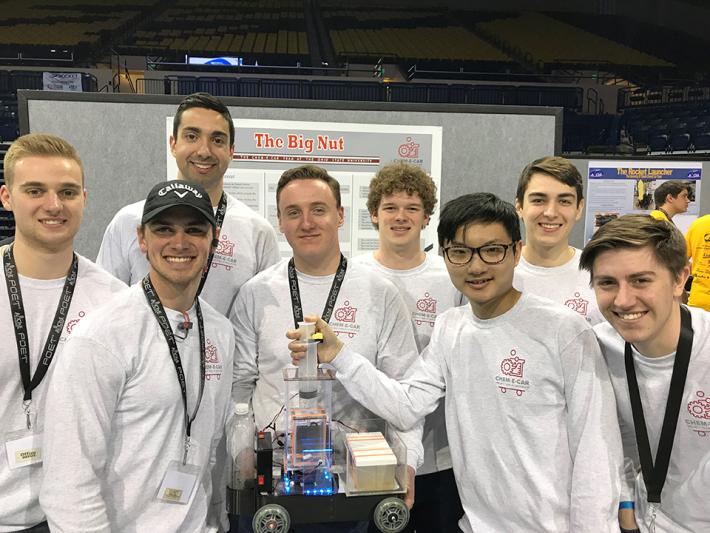 The ChemE Car team must now pick which car to take to the national competition this fall, as the rules only allow a team to bring one car to that competition.

"Everyone worked incredibly hard and put in so much time into making these cars successful," Gruber said. "We are already looking forward to the national competition in Orlando this fall!"

Congratulations to all of our hard-working ChemE Car Team members! A list of those able to attend the competition appears below, but many others contributed to the team's success. For instance, Dave Lendl, who is the group's design lead in charge of all the 3D modeling and 3D printing of many of the parts of our car gets a lot of credit for winning the best-designed car, Gruber said.

The team's success indicates that notable improvements have been achieved, hopefully paving the way for more. "As a club, until last year we hadn’t made it to the national completion in 5 years. We took third at regionals last year and qualified for nationals and now we have qualified again and took first and second at regionals, so as a club we are definitely on an up swing that we want to keep up for many years to come. We’re already starting to think of new car ideas to start next semester while our other car prepares for nationals," Gruber added.

There are currently about 30 active members, and that number is growing every year. (For a full list and more information on ChemE Car in general, visit the ChemE Car website.) "This club has provided me with great practical engineering and leadership experience and I am looking forward to see how they improve in the future," said team member Andrew Bitter.

AIChE’s annual Chem-E-Car Competition increases awareness of the chemical engineering discipline among the public, industry leaders, educators, and other students.

Competition Attendees from the Pressure Team (1 cm from finish line)

Competition Attendees from the Battery Team (12 cm from finish line)