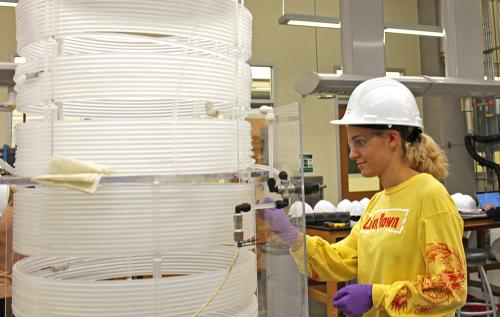 The equipment in the lab is similar in size and capabilities to equipment students will use in co-ops, internships, and future jobs. Being able to learn how to safely and efficiently perform laboratory experiments in the lab offers undergrads a competitive advantage when interviewing.

Take a moment to view the entire laboratory in a 360 degree view!

Professor John Clay and others do exciting live demonstrations in Unit Ops, such as this flame experiment, that keeps things interesting!

The most impressive experiment in Unit Ops is the continuous distillation column. Spanning over twenty-five feet, the column provides a striking visual display for visitors, who can see the column from the lobby. The twelve-tray bubble-cap distillation column is used to distill a mixture of water and ethanol.

In moving the column to CBE's new building, the column received a number of improvements. New automated sampling ports, designed by Leigh Evrard, were added. Now, with the push of a button, students can obtain samples from each tray in the column.

Mike Wilson is pleased with all the improvements. "I live for Unit Ops," he said. "Unit Ops is very trying at times, but seeing the group effort -- you just feel the energy in the air."   Mike, who is a machinist, helps students by building and repairing equipment for experiments with the aid of a 3D printer, lathe, and thread mill, among other equipment.

Many students experience strong peer bonding as a result of the shared challenge, and feel an immense sense of pride and accomplishment upon completing the class. But it's not all hard work. Students still manage to enjoy their time in Unit Ops and have some fun! 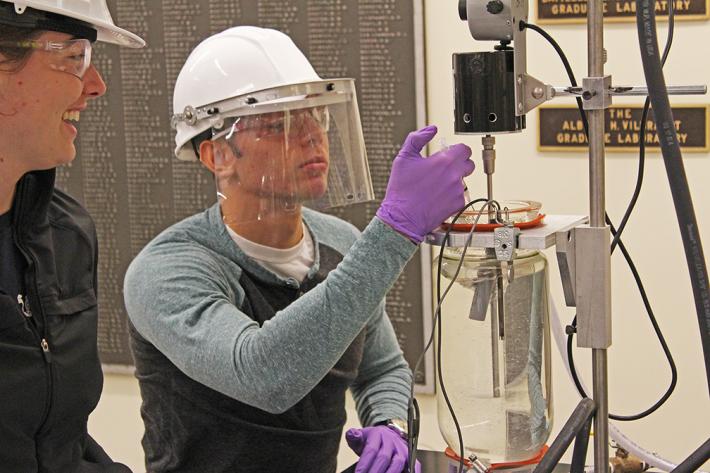 "I like Unit Ops because it brings everything together," said undergraduate Leah Soppi. "Unit Ops also teaches us how to work with people, which is why it is one of my favorite courses!"

Later, while job-hunting and starting a new job, graduates appreciate the experience even more. Major companies have reported back to our Unit Operations team that they prefer Ohio State grads over engineers from other schools (even higher-ranked programs) who don't provide the valuable hands-on training such as what is available in Ohio State's Unit Operations class.