The student chapter of the American Institute of Chemical Engineers (AIChE)  promotes academic excellence in the field of chemical engineering and provides opportunities for students to connect with one another, department faculty, industry representatives, and the local community.  As such, it opens up opportunities for students who want to broaden their educational experience, expand their knowledge about career opportunities, get practical advice from experience alumni, and otherwise build upon their professional and interpersonal skills.

For more information on how to get involved, please visit AIChE at Ohio State.

To recognize and encourage involvement in AIChE and activities which benefit students and the William G. Lowrie Department of Chemical and Biomolecular Engineering, AIChE at Ohio State introduced the AIChE at Ohio State Undergraduate Awards Program.

Students may nominate their chemical engineering peers for three different types of awards (listed below).

Award nominations are due February 20, 2022 at 11:59 pm!  Contact your AIChE Officers for more info at aicheohiostate@gmail.com

1. Exemplary Service and Leadership Award. For students providing significant leadership and/or service on behalf of their peers and/or department;

2. Outstanding Community Outreach Award. For students whose consistent and impactful activities facilitate an overall sense of belonging and community;

3. Outstanding Support of Undergraduate Education Award. For students who help mentor and/or coach their peers.

Award winners will be recognized at the department's annual Awards Banquet held in the spring.

Chem-E-Car is an AIChE-affiliated competition where student teams from universities/colleges across the country compete against one another to design and create a "car" that is propelled and stopped solely by chemical means (Source: AIChE). 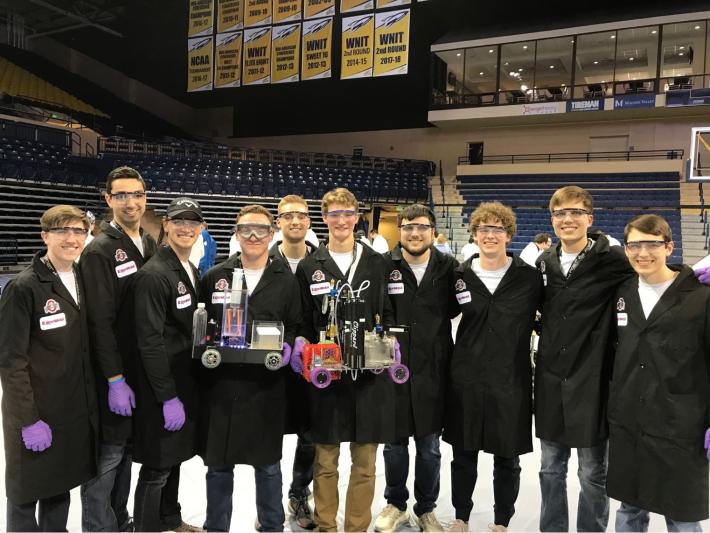 Ohio State's team competes annually and has had several key successes, including a first-place win at the 2019 Toledo Regional Competition. In addition, the Battery Team won the Best Design competition and took Second Place in the Poster Competition.

Currently, the team is working on four cars, which is the most ever done at one time because of the great turnout and interest ChemE Car has been receiving. Last year at the regional competition the team took first and second place overall. Ohio State's cars were .01m and .12m away from the target line. The team also won awards for the design of their car and poster. One of those winning cars (the battery car led by Jack Thomas) is currently preparing for the national competition this November in Orlando, Florida.

The new cars the group is working on are a fuel cell car (led by Joe Flory and Erin Kelleher), a thermoelectric car (led by Paul MacDonald), and a bio-car (led by Adam Benway). These cars are much more adventurous than we have ever tried before, but we have been making great progress on them so far.

If anyone is interested in joining they can email current president Joe Gruber to be added to the email list. Generally, the thermoelectric team meets Monday at 7:00, the fuel cell team meets Tuesday at 7:30, and the bio car meets Wednesday at 7:15 in CBEC 067.

In October 2018, the team competed at the National Competition in Pittsburgh, Pennsylvania, winning the Sportsmanship Award!

In 2017 the team experienced success at the North Central Regional AICHE Conference at Purdue, placing 3rd. This qualified the team for the first time in several years for the national competition held the following autumn. See OSU ChemE Car placing third in Regionals in Spring 2018!

The 2016 team created a pressure car that ran on pressurized gas. The reaction used was solid citric acid with baking soda to produce carbon dioxide gas. The gas was stored in multiple storage tanks and was next used to power an air motor at a regulated pressure. The chassis was designed and built by team members, and it included a custom gearing system and a laser cut acrylic frame. Team members used 3D printed parts on the chassis that were designed and manufactured by student members.

Visit their webpage to learn more.

Below, meet our recently- elected 2019 Executive Board! For more info about the team, please visit the ChemE Car website!