On April 24-25, 2003, a two-day program celebrated the Centennial of the Department’s founding. The event was divided into two parts:

One day was devoted to a look backward at the chemical engineering profession and at the history of the Department, including reminiscences by alumni from the ‘30s to the ‘70s and by faculty of the last 25 years:

A video power-point presentation depicting the 100-year development of the department was presented by Geoffrey Hulse.

Professor Bob Brodkey narrates a History of the Department of Chemical Engineering, written by Geoffrey Hulse, in this video.

Ed Slowter, a graduate of the Class of 1934, gave a speech which reminisces about the Department during the 1930s and his relationship with Dr. Withrow and Dr. Koffolt.

Professor L.E. (Skip) Scriven described the development of reaction engineering in his talk, "When Chemical Reactors Were Admitted and Earlier Roots of Chemical Engineering.

A symposium was held in which four distinguished chemical engineers 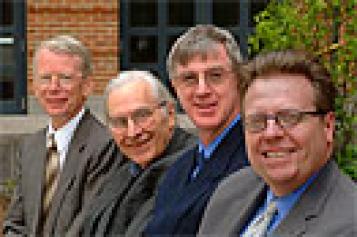 addressed the future in their areas of research under the general title “Unsolved Problems in Chemical Engineering.”  The topics are:

Howard Brenner – Massachusetts Institute of Technology
“Unsolved Problems in Fluid Mechanics: On the Historical Misconception of Fluid Velocity as Mass Motion, Rather than Volume Motion."